The German Program at UNCG is committed to the integration of research, teaching, and learning within the tradition of a humanistic liberal arts education. All German faculty believe that a successful scholar and teacher demonstrates the nexus between teaching and research by developing courses that are based on one’s research and that engage our students in research projects in order to help them prepare for a range of academic and professional careers that require a passion for life-long learning. Our curriculum explores interdisciplinary questions of aesthetic, historical, and social importance in a global context. These comparisons frame the analysis of the German language, Germany, and German-speaking countries and peoples, and their histories and cultures. They also allow students to study the repercussions of this engagement by reflecting on their own personal and public identities. Professor Brooke Kreitinger prepared a presentation on Undergraduate Research in German Studies. This presentation entails many useful tips on how to get started with your own research. 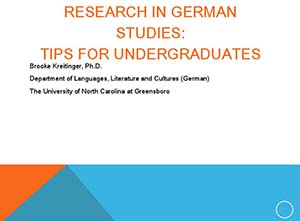 Please find below samples of our students’ work:

In conjunction with a seminar offered by the German Program, GER 306, The Culture of Soccer, AdriAnne Cole conducted research on the cultural implications of soccer, maybe the most popular sport in Germany. Her study abroad semester in Germany coincided with Germany serving as the host of the World Cup in soccer. AdriAnne found ample opportunity to study the importance of soccer in German culture and everyday life. Her final project, “Bild-ing a Group Identity: Visually Constructing Gender and National Pride in the Context of German Soccer,” was well received and exhibited at various events.

In the fall of 2009, Professor Rinner taught GER 306, On Walls. Through a close reading of journalistic and literary texts and feature films, this class reflected on the twentieth anniversary of the fall of the Berlin Wall, an event that is widely understood as marking the official end of the Cold War. The class was connected with a symposium, “20 Years Fall of the Berlin Wall – Germany, a Sustainable Democracy?” that took place in November 2009 in order to commemorate this anniversary at UNCG. In addition, renowned German author Peter Schneider visited UNCG and students had the opportunity to meet the author of “The Wall Jumper” a story widely understood as accurately anticipating the problem that persisted after the opening of the actual wall, namely the wall in people’s head that continued to shape East- and West-Germans’ attitudes of each other in the decade following the fall of the Berlin Wall. These two events encouraged the students to be active participants in the academic and public discourse beyond the classroom setting. Students responded well to this challenge and wrote several thought-provoking research papers, including one that was subsequently published in a peer-reviewed undergraduate research journal. Click here to view! 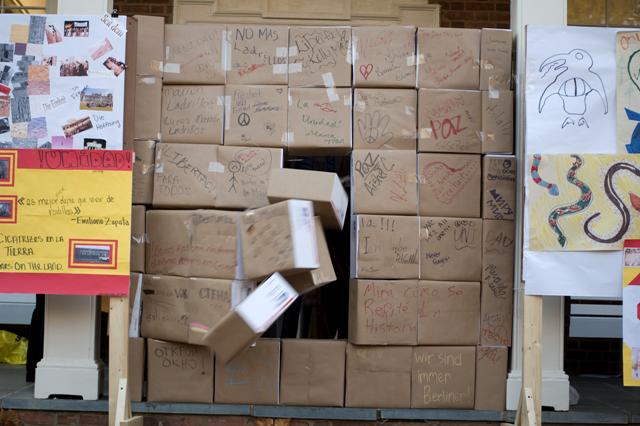 In spring 2014, Professor Dietkus organized a panel, “Undergraduate Research in Feminist German Studies,” for the Southeastern Women’s Studies Association (SEWSA) conference in Wilmington, NC. Undergraduate Laura Parker (Class of 2014) presented a paper on “Depictions of Rape in Medieval Literature,” and Candyce Mileas (Class of 2014), presented a paper entitled “The Analysis of Brunhilde of Medieval Germany’s Nibelungenlied and Broomhilda of D’jango Unchained.” Both papers were very well received and stimulated a lively discussion. Congratulations, Professor Dietkus, Candyce and Laura! 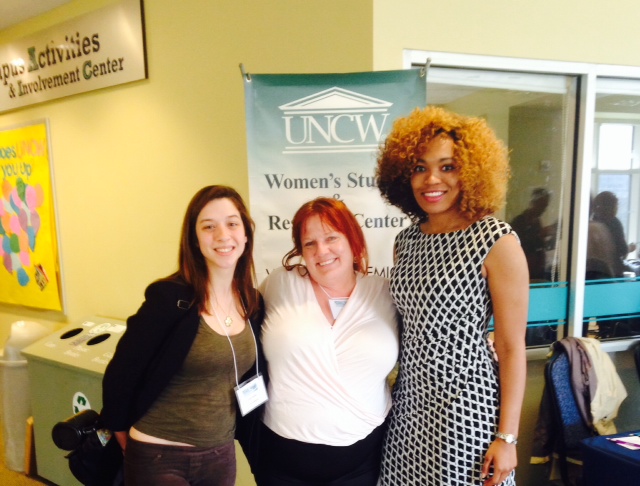 If you are interested in learning more or have a research project in mind, please speak with your German professor or contact the Director of Undergraduate Studies in German, Professor Rinner!