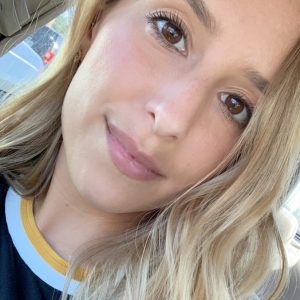 My love for languages and travel began early in my life. My father has travelled around the world for his job since I was a little girl and he would always bring me back souvenirs and would show me pictures of the places he visited. I always asked him if I could go with him, but of course I was too little. Eventually, he was able to take my mom, my sister and I to Paris for the first time when he had some meetings there. It was the summer after my Sophomore year of high school and that was when I first fell in love with France, French culture and the language.

I started studying Spanish as a Freshman in high school. I then added French as a Junior after our trip to Paris and it quickly became my favorite language to study. After graduating high school, I decided I wanted to return to France and put my language skills to use. So, I did an exchange through the Rotary Youth Exchange program where I was paired with a French girl, Maud, from Grand-Champ, France and I went to live with her family for a month there and then she returned to Greensboro with me to live with my family for a month here in the US. This experience abroad helped me realize immersion truly is the best way to learn a language. I knew that when I went to university I would be doing a study abroad in France.
During my Freshman year at UNCG, with the help of the wonderful International Program Center, I began making plans to study abroad my Sophomore year. At the time I was working on both my French major and my Spanish minor, so I decided that I would study for half of my Sophomore year in Rennes, France and the second half in Cáceres, Spain. It required a lot of planning, but I knew in the end it would be worth it because I would be getting that immersion experience in both of my target languages. My experience abroad in both France and Spain was phenomenal and my language skills improved exponentially.
After I finished all of the required courses for my French major and Spanish minor, I decided to start studying German, which is another language that has always been fascinating to me. I took a semester of German here at UNCG and then found a German-language intensive program in Mannheim, Germany at the University of Mannheim. I took that course for a month in the summer and it was a great experience! I studied it for another semester after I returned, but then decided to stop studying it for the moment and focus on finishing my CARS major.
I have tutored French at UNCG since January 2016 through both the TASP program and the Language, Literatures, and Cultures department. When I graduate in May 2020, I hope to be able to continue to put my language skills to use when I find an internship in the retail industry and eventually a job in the industry, whether that be here or abroad. I also hope to be able to pick German back up again in the future!