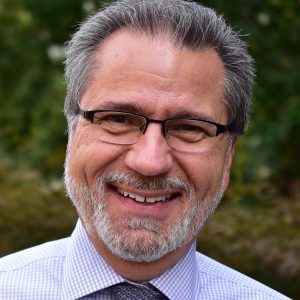 Dr. Campo holds the PhD and MA from the University of Pennsylvania and BAs in French, Philosophy, and Studio Art from the University of California at Irvine.  Presently, he is Professor of French and Head of the Department of Languages, Literatures, and Cultures at The University of North Carolina at Greensboro.  His research focuses on sixteenth-century French literature with specializations in the poetic and aesthetic theory of the Renaissance (especially the poetry of Pierre de Ronsard and the poets of the Pléiade), literature and the other arts, laughter theory, and early-modern Orientalism and representations of cultural alterity.  Expertise-related service includes elected leadership and member positions on the Council of the Sixteenth Century Society and Conference, the executive committee of the MLA Division for Sixteenth-Century French Literature, terms as vice-president and president of the North Carolina American Association of Teachers of French, and regional leadership on the culture proficiency task force of the American Association of Teachers of French.  He is also the recipient of major awards and honors, including UNCG’s Alumni Teaching Excellence Award and the Teaching Excellence Award for UNCG’s College of Arts and Sciences, election to UNCG’s Eta Delta Chapter of the Phi Beta Delta International Scholars Honor Society, and election to Phi Beta Kappa.  In his current position and his previous assignment as Director of UNCG’s interdisciplinary International and Global Studies Program, Dr. Campo has made significant contributions to the internationalization priorities of the university.  Besides quadrupling the size of IGS in the span of three years, he expanded curricular and co-curricular opportunities across the campus through experiences like UNCG’s Global Leadership Program, IGS’s monthly Global Spotlights, summer study abroad and exchange programs in Angers, France, and the Asian Autumn Festival.  The latter event and new positions in our Chinese and Japanese studies programs were direct results of a $178,000 UISFL/Titles VI (A) grant project to develop UNCG’s major-level concentration in Asian Studies for which he was PI from 2008-2011.