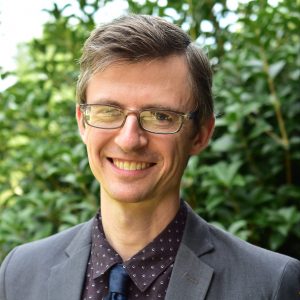 Matthew first met Russian culture when he was 8 years old growing up in Atlanta, but it was not until he took a trip to Russia after high school that he threw himself into learning Russian and reading Russian literature. Since then he has studied Russian music, language, and literature and is enthusiastic about sharing his love of Russian with students.

In his dissertation, he wrote about (Russian) animals:

Animals complicate everything. They are implicated in science, in theology; they change the course of human development in its technological, cultural, and many other aspects. Animals have often provided material for thinking about what it means to be human, since they have been harnessed by writers to generate symbolical codes, allegories, and associations. Animal bodies are physical and figurative bodies that populate the real world and fictive worlds and in both are often unnoticed. At the same time, they enable and define continued human existence not only in a physical sense but in a figurative sense, and attention to animals inevitably yields productive consideration of a wide range of questions.

My thesis examines the multiple functions of animal imagery in the works of Nikolai Leskov (1831-1895), an underappreciated contemporary of Tolstoy, Turgenev, and other well-known Russian writers of the nineteenth century. In Leskov’s fiction, the animal image acts as a point of convergence for questions of scientific, religious, and social content that engaged society in mid-nineteenth century Russia; these questions form the backdrop and sometimes the substance of Leskov’s literary works. Animal imagery serves multiple symbolic, interpretive, and affective functions in Leskov’s texts and I trace these functions in works in which they are most conspicuous. Animal imagery invokes the authority of reality, elicits empathy in the reader, and enhances the literary riddle with which Leskov challenges his readers.