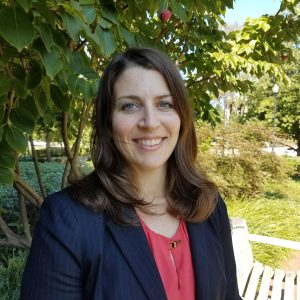 Brooke Kreitinger is originally from western North Dakota and grew up in Minnesota. After discovering a passion for foreign languages and cultures, she majored in German and French at the College of St. Benedict in the “Lake Wobegon” region of Minnesota. Dr. Kreitinger then spent two years in Austria teaching English as a Fulbright Teaching Assistant. Two years immersed in the German language (or rather Austrian dialects!) and Austrian culture compelled her to deepen her understanding of the German language, German-language literature, and German-speaking cultures. She completed her Ph.D. in German Studies at Georgetown University. Her research interests span various disciplines by examining the contemporary transnational literature and film through the lenses of globalization discourse, theories of cosmopolitanism, and border studies, with particular focus on representations of space, subjectivity, and cultural identity. She is currently working on a project addressing the refugee crisis in Germany and the E.U. as represented in documentary films, which is part of her larger book project, Empathetic Aesthetics: Acts and Encounters of Recognition and Compassion in Transnational Literature and Film. Dr. Kreitinger’s interests also include language pedagogy and curriculum development. She strongly believes in the importance of foreign language learning and liberal arts education and therefore dedicates herself to excellence in teaching and supporting student learning both in and out of the classroom.

“The Spatial Imagination of Accelerated Globalization in Contemporary German-language Novels.” (2012)