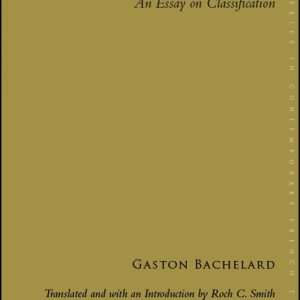 An English translation of the French philosopher’s sixth book, in which he seeks to develop a metaphysical context for modern atomistic science.

French philosopher Gaston Bachelard (1884–1962) is best known in the English-speaking world for his work on poetics and the literary imagination, but much of his oeuvre is devoted to epistemology and the philosophy of science. Like Thomas Kuhn, whose work he anticipates by three decades, Bachelard examines the revolution taking place in scientific thought, but with particular attention to the philosophical implications of scientific practice. Atomistic Intuitions, published in 1933, considers past atomistic doctrines as a context for proposing a metaphysics for the scientific revolutions of the twentieth century. Though focused on philosophy of science, the perspectives and intuitions Bachelard garnered through this work provide a unique and even essential key to understanding his extensive writings on the imagination. This translation, with its introduction and explanatory notes will help to make this aspect of Bachelard’s thought accessible to a wider readership, particularly in such fields as aesthetics, literature, and history.